The scourge of suicide is striking the veterinarian community more than any other industry and the official body representing vets is backing a clampdown on how the most commonly used death drug is managed.

Studies suggest vets ­commit suicide at four times the rate of the general population, commonly with the same drug they use to ­euthanise animals, pentobarbital.

The Australian Veterinary Assoc­iation is calling for laws that demand the drug be kept more ­securely in surgeries and vehicles, as there is no regulation on its storage at clinics. But it has rebuffed suggestions that the drug, also known as Nembutal, should be reclassified as a level eight controlled drug by the Therapeutic Goods Administration.

The government body is considering changing the classification of the drug to the same level as morphine, but the AVA said in its submission that this would do little to prevent suicide while making the role of animal welfare harder.

AVA policy manager Debbie Neutze said the change in classification would be too onerous, ­requiring an explanation for how every milligram of the drug was used and requiring pet owners’ names and addresses.

“Euthanasia in a veterinary practice is often undertaken in emergency situations, often involv­ing multiple patients, often out in the field, often with no actual­ owner,’’ Ms Neutze said.

“For example, vets use it to euthanase wildlife after bushfires.

“And it is a drug used in everyday vet practice, so the recording of every little milligram would be difficult.”

She added that the record-keeping requirements of the schedule eight classification were designed to tackle the ongoing abuse of drugs, which is not the case with pentobarbital users.

Ms Neutze noted there were various reasons for poor mental health in the industry, including a familiarity with euthanasia, the distress of putting down animals and high-pressure work. Vets are also surprisingly modestly paid, with an average wage of $79,000, lower than the national average. 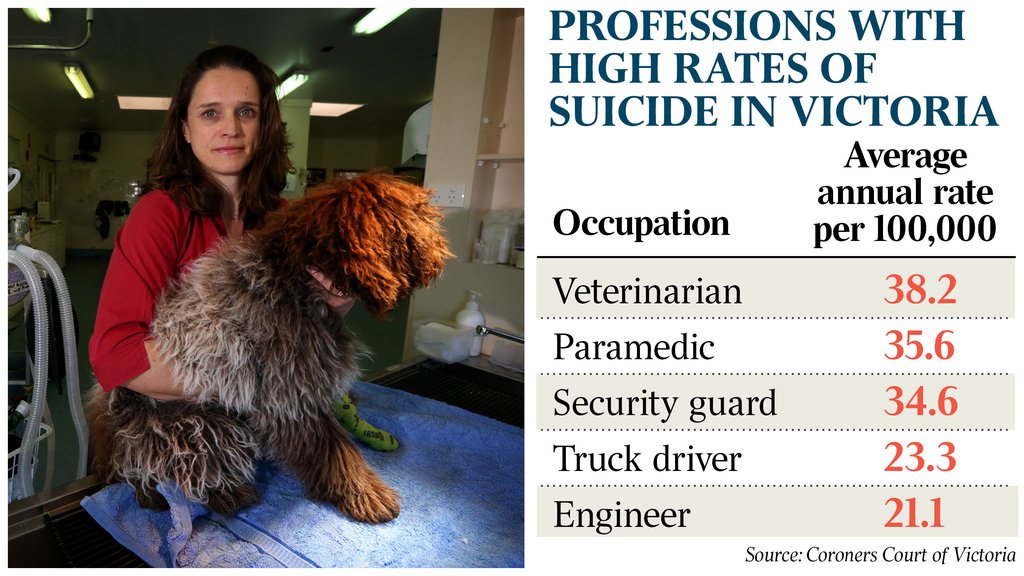 The AVA was rolling out var­ious programs to address the problem, including a mentoring program for new vets, while teaching first aid in mental health.

A trustee of the AVA Benevolent Fund, Brian McErlean, said there was anecdotal evidence that the programs were working, with only one reported suicide in the profession in the past year.

Before this, over an 18-month period the AVA recorded six suicides, which equates to about 40 suicides per 100,000 people — four times the national average.

Canberra vet Alison Taylor is a part owner of five practices in the city and believes the industry has come a long way in dealing with the mental health of its workers.

She was a mentor to graduate vets and students and has taken the AVA’s mental health first-aid course.

“The main thing that leads to vets that don’t cope so well is when they are in an environment where that is not supported or recog­nised, where they don’t have enough support and they feel isol­ated,” Ms Taylor said.

“It is a high-pressure job and if there are not people looking out for them then that leads younger people to feel more vulnerable.”

Beyondblue chairman Jeff Kennett said the suicide rate of vets was “a great concern”, adding that the issue was raised at the charity’s board meeting last week.